Antonio Brown tossed his jersey and shoulder pads toward the bench, threw his glove and undershirt into the stands and ran off the field bare-chested, waving a peace-out sign to fans in the end zone while Tom Brady huddled the offense for an important play.

Following his strange outburst Sunday, Brown is out as a member of the Tampa Bay Buccaneers and one can only hope he finds peace.

Brown’s bizarre behavior quickly blew up on social media and dominated NFL headlines around the league on a day Brady engineered another impressive comeback and several teams clinched playoff berths.

But Brown’s mental health is no joke to be trivialized by a meme.

It’s easy to pile on the four-time All-Pro wide receiver, especially after he was suspended three games for misrepresenting his vaccination status.

However, Brown clearly needs help. His on-field, in-game meltdown was the latest troubling incident in a career filled with big plays and absurd actions.

Brown wore out his welcome in Pittsburgh, was released by the Raiders before even playing a game for them in 2019 and lasted one game with the Patriots. He got another chance in the NFL with Brady and the Buccaneers last year after serving an eight-game suspension for multiple violations of the league’s personal-conduct policy, and ended up winning a Super Bowl ring. Even Brady couldn’t save his buddy’s roster spot after this incident. 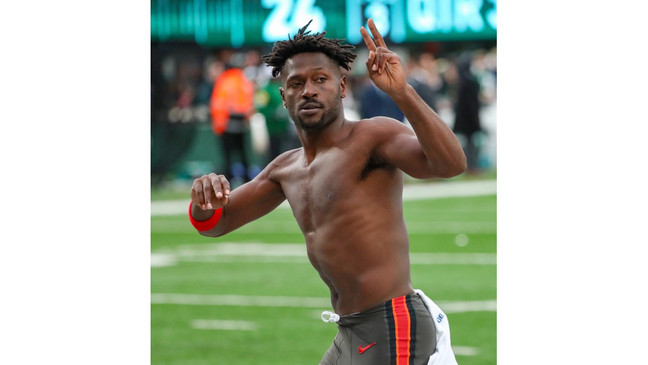 Tampa Bay Buccaneers wide receiver Antonio Brown (81) gestures to the crowd as he leaves the field while his team’s offense is on the field against the New York Jets during the third quarter of an NFL football game Sunday, Jan. 2, 2022, in East Rutherford, N.J. Brown left the game and did not return. (Andrew Mills/NJ Advance Media via AP)

“It’s a difficult situation,” Brady said after throwing a 33-yard touchdown pass to Cyril Grayson with 15 seconds remaining to lead Tampa (12-4) to a 28-24 win over the New York Jets (4-12). “Everybody should do what they can to help him in ways that he really needs it. We all love him. We care about him deeply. We want to see him be at his best. Unfortunately, it won’t be with our team. … I think everyone should be very compassionate and empathetic toward some very difficult things that are happening.”

Buccaneers coach Bruce Arians rescinded the one-strike policy he originally gave Brown and brought him back after his most recent suspension. Brown made it easy for Arians to get rid of him this time.

“He is no longer a Buc,” Arians said. “All right? That’s the end of the story. Let’s talk about the guys who went out there and won the game.”

Brown’s career in the NFL is most likely over. It’s hard to imagine another team would give the 33-year-old an opportunity and risk all the drama he brings.

Still, Brown should get the benefit of various mental health services the NFL offers players and team personnel. The league and the players’ union have plenty of resources available for anyone who needs it — if they ask.

While Brown deserves criticism for quitting on his team during a game — the Buccaneers were facing a third-and-7 and trailed 24-10 in the third quarter when he walked out — the mercurial seven-time Pro Bowl pick needs support from his friends and those close to him.

“I instantly sent him a text,” said Le’Veon Bell, the former Steelers star who played his second game with the Buccaneers. “Obviously, he texted me back and I talked to him. He’s still one of my close friends. You won’t hear me talking bad about AB at all. Obviously, I understand things happen, but he’s one of my closest friends, a close teammate. Overall, he’s a good person. Some bad decision-making sometimes but he’s human, he’s not perfect, and we’ll continue to move on without him and keep moving forward.” 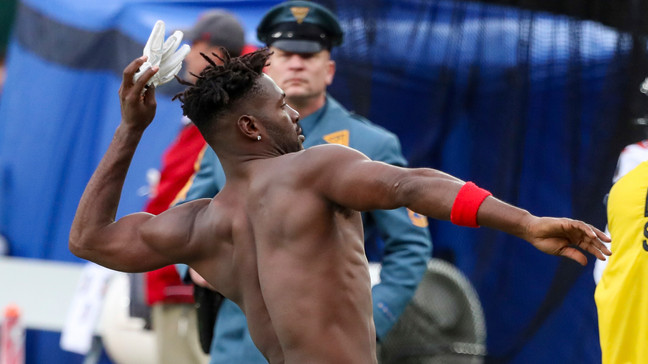 A N.J. State Police trooper, background, watches as Tampa Bay Buccaneers wide receiver Antonio Brown (81) throws his gloves into the stands while his team’s offense is on the field against the New York Jets during the third quarter of an NFL football game Sunday, Jan. 2, 2022, in East Rutherford, N.J. (Andrew Mills/NJ Advance Media via AP)

Bell and others are disappointed things went down this way.

“It’s tough,” he said. “Obviously, when I came over here, I was happy to be reunited with him. Unfortunately, it was only two games but at the end of the day, I wish the best for him outside of football or whatever’s next for him. I’ll still be hanging out with him, taking to him on a daily basis and I’ll continue to try and make plays for this team.”

If Brown’s career is over, he’ll finish with 928 receptions, 12,291 yards receiving and 83 TD catches. His stats are worthy of the Pro Football Hall of Fame, but it’ll be tough to convince voters to overlook the character concerns.

For now, Brown has more important matters to address.